Voluntary Benefit Participation To Rise Over 30% In The Next Year

Employers, are your employees not appreciating the benefits you offer? Check your attitude first.

Why Millennials Are So Important In The Workplace

Voluntary Benefit Participation To Rise Over 30% In The Next Year

Employee participation in voluntary insurance benefits has risen nearly 10% in the past three years and is expected to increase exponentially in the coming months. In a recent study conducted by Eastbridge Consulting Group, employee participation rose from 21% in 2014 to 28% in 2017.

Researchers are attributing the recent swing in demand for voluntary benefits to employers deviating more and more of the actual cost of health benefits to the employees. With health care costs continuing to rise businesses are being faced with the tough decision of either letting go of their health plans entirely because they can no longer afford it, or, shift a bigger portion of the cost onto the employee so they can continue to offer coverage.

Ginger Bates, director of research for Eastbridge Consulting Group says they expected some growth but were surprised at just how much it increased. “We were expecting the participation rates to increase over what we saw in 2014 but the increase is probably higher than we might have predicted. Over half of the carriers reported increased participation rates in the past two to three years.”

In an article written by Employee Benefits News they display an infographic that suggests it’s only the beginning for voluntary benefits growth in the work place. Depending on the type of coverage, increases of up to 35% can be expected over the next year. 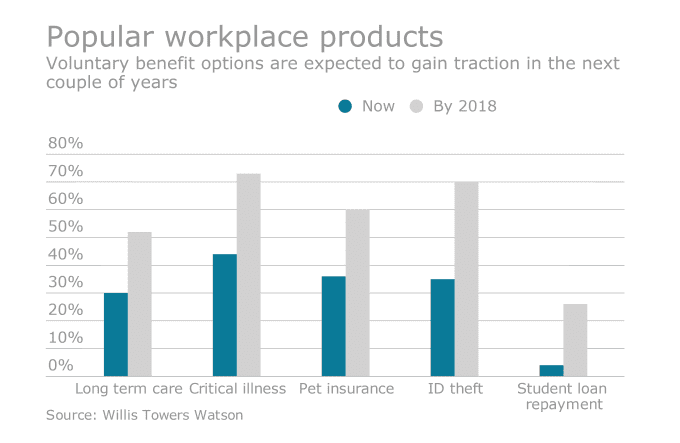 While there is a drastic rise in demand there are still several obstacles both employers and insurance reps must continue to overcome. For the employer, employee participation should be a main focus point. With over 70% of all voluntary carriers agreeing, getting more and more employees on-board is a necessity.

For the insurance rep, Bates went as far as listing a few target areas she believes are holding back the success of several agents. “From a carrier or broker’s perspective, the most limiting factor is the lack of employer engagement which typically leads to a lack of access to the employees. Other obstacles are having enough time with the employees or enrollment capabilities (i.e. not just a self-service method) for the employees to adequately explain the benefits and costs.”

Only time will tell just how much employee participation in voluntary programs continues to grow, and though there are some clear wrinkles that need to be ironed out in the enrollment process one thing is for certain: The demand for voluntary is there and continues to grow each year. Rising Trends In The Benefits Market

This template supports the sidebar's widgets. Add one or use Full Width layout.